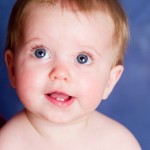 When will my baby start teething?

The process of teething often follows hereditary patterns, so if the parents teethed early or late, your baby may follow the same pattern. However, the most babies have their first teeth come in when they are between 4 and 7 months old. In rare cases, a baby’s first tooth is visible at birth. We call this kind of teeth as neonatal teeth. Those teeth that emerge through the gum during the first month of life are called as natal teeth. Rarely, their presence is just one of several unusual physical findings which make up a syndrome. If the possibility of a syndrome exists, consultation with a pediatrician and/or geneticist can be helpful. The tooth is often loose and is commonly removed prior to the baby’s hospital discharge to prevent aspiration into the lungs. It is good to mention about teething during prenatal counseling because it most likely will be the first postnatal oral issue that parents confront.

In what order do baby teeth usually come in? 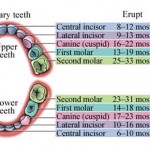 Teeth actually start developing while your baby is in the womb, when tooth buds form in the gums. Teeth break through the gums one at a time over a period of months. When a baby starts teething, there is no set pattern on when it will begin, how long it will take and how painful it will be. However, most follow a common pattern as shown in the diagram on the left. The full set of 20 baby teeth, called the primary teeth, should not fall out until his permanent teeth are ready to start coming in, around age 6. It is good to know about the pattern of eruption and to talk to your pediatrician if your child has unusual tooth development, such as late eruption of the teeth or unusual sequence of tooth eruptions. Tooth development issues usually resolve on their own or are easily treated.

What are the signs of teething?

Teething is a normal physiologic phenomenon that usually occurs with little or no problems. In most teething toddlers, the eruption of baby teeth is preceded by increased salivation, and the child will want to put their fingers into the mouth. These observations may be the only teething signs that the teeth will soon erupt.

As eruption of the baby teeth coincides with a diminution in circulating maternal antibodies, teething is often blamed for systemic symptoms like diarrhea, fever or respiratory tract infection. Since teething is a natural process, the association with fever and systemic disturbances is not justified. They should be considered coincidental to the eruption process rather than related to it.

Nevertheless, some babies exhibit teething signs of daytime restlessness, an increase in the amount of finger sucking or rubbing of the gum, an increase in drooling which can cause a ras on the chin, or face, and possibly some loss of appetite because their mouths hurt. Some children may experience a change in the color of the oral mucosa, sometimes with small bleeding spots. Local discomfort, and so disturbed sleep, may accompany the actual process of eruption. Inflammation of the gums before complete emergence of the tooth may cause temporary painful condition that usually subsides within a few days.

How can I relieve my baby’s discomfort during teething?

To help ease your baby teething symptoms, you can:

The teething process will come and go just like so many other things with new babies.  Keep trying different things until you find what provides the best relief for your baby. It is highly recommended that you contact your pediatrician first before trying any of these methods especially the over-the-counter medications.