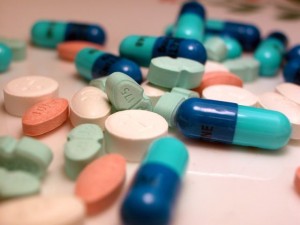 Oral side effects caused by drugs are relatively uncommon but may be important. Some drugs almost invariably cause side effects in the mouth, for example dry mouth from many drugs, and oral ulcerswith some of the cytotoxic agents, while other drugs rarely cause oral complications. Some habits, such as the use of oral snuff (smokeless tobacco), can cause gum recession and leukoplakia (a precancerous white lesion) and possibly predispose to oral cancer whereas oral use of cocaine can cause gum ulceration or peeling of mouth tissues. Drugs that occasionally cause complications in the mouth are discussed below.

The most common drug-induced oral disorders are: 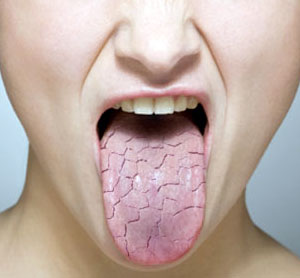 Common habits such as tobacco smoking, alcohol use (including in mouthwashes) and use of beverages containing caffeine (coffee, some soft drinks) can cause some oral dryness. Drugs are the most common cause of reduced salivation. The drugs most commonly implicated in dry mouth are the tricyclic antidepressants, antipsychotics, atropinics, and antihistamines. The complain of dry mouth is therefore, particularly common in individuals treated for hypertensive, psychiatric, or urinary problems.

The cause for which the drug is being taken may also be important. Individuals with anxiety or depression may complain of dry mouth even in the absence of drug therapy or evidence of diminished salivary flow.

Salivary gland pain can be a side effect of some drugs such as bethanidine, clonidine, methyldopa and some cytotoxics.

Anticholinesterases are the main cause of sialorrhoea or increased salivary flow.

Discoloration of saliva (usually red in color) may be caused by rifampicin and rifabutin and a few other drugs.

Drugs commonly impair taste by causing a loss of acuity or sharpness of taste (hygeusia) or distortion of function (dysgeusia) either by interfering in the chemical composition or flow of saliva, or by more specifically affecting the taste receptor function or signal transduction. Dry mouth also disturbs taste perception.

Oral ulceration may follow burns from the local application of aspirin or toothache preparations, potassium tablets, pancreatic supplements and other agents such as trichloacetic acid and hydrogen peroxide.

Mucositis (inflammation of the mouth mucosa) and ulceration is caused by many chemotherapy regimens, particularly those involving 5-fluorouracil or bleomycin.

Aphthae can be caused by NSAIDs and beta blockers and possibly by nicorandil and alendronate.

Oral hairy leukoplakia usually affecting the dorsum and lateral borders of tongue and floor of mouth, may be a consequence of Epstein-Barr virus infection in individuals on treatment with corticosteroids, cyclosporin or other long-term immunosuppressive regimens.

Non-Hodgkin’s lymphoma, usually manifesting as ulceration of the gums, fauces or palate, or Kaposi’s sarcoma are rare complications of long-term immunosuppressive therapy.

Fixed drug eruptions comprise of repeated ulceration at the same site in response to a particular drug. However, intra-oral contact stomatitis is a dubious entity. On any such reactions, the lips or skin around the mouth are far more likely to be affected.

Since noticed as a side effect of antimalarial therapy, there has been an ever-growing list of drugs that may give rise to mucocutaneous lichen planus-like eruptions (lichenoid reactions). The drugs now most commonly implicated in lichenoid reactions are the non-steroidal anti-inflammatory drugs and the angiotensin-converting enzyme inhibitors.