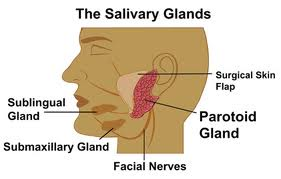 In addition to the major salivary glands there are thousands of minor salivary glands present throughout the lips, mouth and throat. Approximately 1 to 1.5 litres of saliva is produced per day. Saliva is 90% water, but also contains proteins that both aid digestion, and keep the mouth and teeth healthy.

Salivary gland enlargement may occur because of:

Obstruction to the duct of one of the glands.

This may be due to either a stone or a narrowing of the duct. Gland swelling typically occurs during eating and is painful. The swelling is caused by saliva build up in the obstructed gland and this can become infected. Stones are most common in the submandibular gland, but occasionally occur in the parotid.

These are most common in the parotid gland. 80% are benign (not cancers) and typically present as a slowly growing salivary mass. The risk of a salivary lump being malignant is higher for submandibular tumours (50% are cancers), and most tumours occurring in the minor salivary glands are malignant but these are rare.

Factors suggesting that a salivary lesion may be malignant include:

The most common benign parotid tumour is a Pleomorphic Adenoma which is solid. The second most common benign lesion is a Warthins Tumour which is cystic (Cyst-adenoma), and most commonly found in the inferior portion of the parotid. They present as a firm but mobile mass but they can become quite large if left untreated. The majority (80-90% of parotid tumours) occur in the superficial aspect of the gland (superficial to the facial nerve) because 80-90% of the gland is superficial to the nerve. In 10-20% of cases, however, tumours occur in the deep part of the gland, and such lesions can even present as a lump in the throat with expansion of an area called the parapharyngeal space at the back of the mouth. In this latter setting the lump may be visible by looking inside the mouth. Benign salivary gland tumours only rarely cause facial weakness, a finding that is virtually diagnostic of malignancy, however pleomorphic adenomas have a risk of malignant change over a long period of time.

The most common malignant tumour (70+%) of the parotid gland in New Zealand occurs as a result of involvement of the lymph glands present in the parotid by either a Squamous Cell Cancer (SCC) or melanoma (MM) of skin of the face or scalp. There may be a past history of a previous skin cancer (SCC or MM) but in a small percentage of patients there is no known previous skin cancer.
These are highly aggressive tumours that often also spread to lymph nodes in the neck. These tumours can involve the facial nerve causing facial weakness. The mass feels hard and irregular and can be fixed to deep structures and/or invade the overlying skin causing discolouration or ulceration. They may be palpable lymph nodes in the neck most frequently in the upper deep cervical region (level II) immediately below the parotid. See â€œNeck Dissectionâ€ in this website for classification of neck levels
Primary parotid cancers are rare. As with the more common metastatic SCC or Melanoma cancers they are usually hard and irregular, can involve adjacent structures or skin and can result in facial nerve invasion and facial muscle weakness.

50% of these are malignant. The mass is below the jaw. If malignant, they can invade adjacent structures and cause facial weakness and abnormalities in tongue function. If malignant, there again may be associated with enlarged lymph nodes, most commonly at levels I and II .

The commonest tumour here is a mucous cyst called a Ranula (a term derived from the Greek word for the swollen area below the mouth of a frog). These may be confined to the floor of the mouth (simple Ranula), or they may extend down into the neck: a plunging or diving Ranula.