INFECTIOUS WHITE LESIONS , WHITE & RED LESIONS
ORAL HAIRY LEUKOPLAKIA
Corrugated white lesion that usually occurs on the lateral or ventral surface of the tongue in patients with severe immunodeficiency
Most common associated disease is HIV infection
Present in 25% of adults with HIV infection but is not as common in children
Prevalence reaches 80% in AIDS
Epstein-Barr virus is implicated as the causative agent
Occasionally reported in patients with other immunosuppressive conditions (patients undergoing organ transplantation, or on prolonged steroid therapy)
Rare cases may occur in immunocompetent persons after topical steroid therapy

Clinical features:
Commonly involves the lateral border of the tongue but may extend to the ventral or dorsal surfaces
Lesions on the tongue are usually corrugated and may have a shaggy or frayed appearance mimicking lesions caused by tongue chewing
May present as a plaque-like lesion and is often bilateral 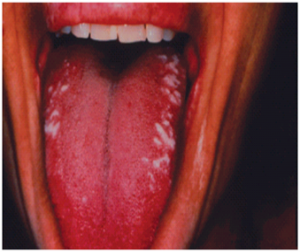 Since OHL is highly predictive of the development of AIDS, differentiation from other lesions is critical.
Probability of developing AIDS was found to be 48% at 16 months and 83% at 31 months after the initial diagnosis of OHL

Treatment:
No treatment is indicated
Usually disappears when antiviral medications such as zidovudine, acyclovir, or gancyclovir are used in the treatment of the HIV infection
Topical application of podophyllin resin or tretinoin has led to short-term resolution of the lesions, but relapse is often seen

CANDIDIASIS
Definition: Candidiasis is the term used to denote infections caused by the species candida.
Candida is the most common oral fungal infection in humans .

ORAL CANDIDIASIS VERSUS ORAL CANDIDOSIS
Oral Candidosis is a collective term given to a group of disorders caused by the yeast candida and its species.
The terms are synonymous
Some authorities such as International society for Human and Animal Mycology (1980) recommend candidosis while others for example Council for International Organizations of Medical sciences (1982) suggest â€œcandidiasisâ€.
The advent of HIV infection and AIDS has resulted in a resurgence of oral candida infections that are usually seen in the very young , the very old , and the very sick.
Candida albicans is the most common candida species isolated from the oral cavity both in health and disease
Morphologically , candida can exist in three forms :
Yeast cells (blastospores , simple asexual spores which develop by budding; subsequently, the buds separate from parent cells)
Pseudohyphae
Chlamydospore forms
Reproduce asexually by budding which takes place in the yeast cell that elongates to form pseudohyphae
Differentiated from others by fermentation reactions and culture methods.
Sabouraudâ€™s agar – moist creamy colonies
Blood agar â€“ dull grey colonies
Corn meal agar â€“ budding cells and chlamydospores

Harmless commensals of the human body.
Part of the normal flora of the mouth, pharynx, intestine, vagina, perianal skin folds, and rarely other skin surfaces.
Present in the mouth of the healthy carrier in a low concentration of 200 to 500 cells per milliliter of saliva.

A.CANDIDA CARRIAGE IN THE ORAL CAVITY
Prevalence: reported prevalence in clinically normal mouths of healthy adults ranges from 3 to 48 % and 45 to 65 % of healthy children.
B. FACTORS AFFECTING CANDIDA CARRIAGE
1. SALIVARY FACTORS
The quality and quantity of saliva and its constituents play a critical role in modulating yeast cell populations

Lack of salivary flushing action and absence of antifungal salivary constituents such as lactoferrin and lysozyme may help explain the increased oral carriage and infection seen in xerostomic patients.
Carriage of yeast is higher in acidic salivas.

2. TEMPORAL VARIATIONS:
Counts increase during sleep but are reduced by taking a meal and by tooth brushing.
Counts are highest early in the morning , and further , where counts are low , the organism cannot be isolated except in the early morning.
Davenport (1970) has found larger numbers of candida in smears from dentures than from mucosa.

When dentures are worn at night , the early morning saliva candida count is high when dentures are not worn at night , the early morning count is the lowest .
Increase in both the frequency of carriage and the density of candidal colonization in denture wearers compared with dentate subjects suggest that prostheses encourage the presence and growth of candida species.

3. SMOKING
Significantly increases carriage by 30 to 70 %
Cigarette smoking might lead to localized epithelial alterations that allow colonization by candida .
Relationship between cigarette smoke and candida is important, as the enzyme system in question can increase the carcinogenic activity of the hydrocarbons

6.ORAL MICROFLORA
Number of studies have shown that candida can be isolated from the oral cavity with greater prevalence and in greater numbers during tetracycline therapy.
7. HOSPITALIZED PATIENTS
The oral carriage of yeast is higher in hospitalized patients with a median carriage rate of 54.7% for all species and a median of 38.1% for C. albicans alone.