The inferior alveolar nerve (sometimes called the inferior dental nerve) is a branch of the mandibular nerve, which is itself the third branch (V3) of the trigeminal nerve (cranial nerve V). 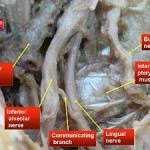 While in the mandibular canal within the mandible, it supplies the mandibular (lower) teeth with sensory branches that form into the inferior dental plexus and give off small gingival and dental nerves to the teeth.

Anteriorly, the nerve gives off the mental nerve at about the level of the mandibular 2nd premolars, which exits the mandible via the mental foramen (supplying sensory branches to the chin and lower lip).

Different variations in the course of the inferior alveolar neurovascular bundle are described (Anderson & Kosinski 1991). The classification by Carter and Keen (1971) in the mandible is illustrated in picture attached to this articleÂ . These results were obtained from only eight dissected mandibles. In another larger study the course of the IAN was evaluated from 3612 radiographs (Nortje et al. 1977). The radiographs were divided into four categories: 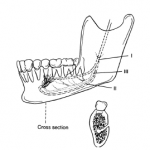 1) high mandibular canals (within 2mm of the apices of the first and second molars),

4) other variations â€“ these included duplication or division of the canal, apparent partial or complete absence of the canal or lack of symmetry.

Of the 3612 subjects, 47% of the canals were high, 49% were low, and only 3% could not be fitted into the high or low canal categories. The main conclusion of this study was, that the mandibular canals are usually, but not invariably, bilaterally symmetrical, and the majority of hemimandibles contain only one major canal.

Multiple mandibular canals of the bifid variety characterized by a single mandibular foramen and two nearly equal canals are unusual. In the study of Nortje and co-workers, duplication or division of the canal was found in 0,9% (33/3612) of the cases
in the panoramic radiographs in otherwise normal patients (Nortje et al. 1977). In another study only 0.08% bifurcation of the IAN in 5000 US Army recruits, aged 17 to 26, was found (Grover & Lorton 1983). Furthermore, Langlais and co-workers (1985)
evaluated routine panoramic radiographs of 6000 patients, and they found 57 (0.95%) cases of bifid inferior mandibular canals, 19 in males and 38 in females. However, no cases of multiple canals in orthognathic surgical cases have been reported. 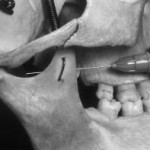 Administration of anesthesia near the mandibular foramen causes blockage of the inferior alveolar nerve and the nearby lingual nerve (supplying the tongue). This is why the numbing of the lower jaw during dental procedures causes patients to lose sensation in: