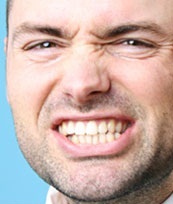 Â If you do clench/grind your teeth frequently during night or day, you could be having bruxism. BruxismÂ is the habitual grinding or clenching oh the teeth during day or night, awake or sleeping. The incidence of bruxism has been variously reported as between 5% to 20 %.

Bruxism is divided into 2 types :

Day Time bruxism is either conscious or unconscious grinding of the teeth during the day. It can occurs along with parafunctional habits such as chewing pencils, nails, cheeks and lips. This type of bruxism is usually silent except in patients with organic brain disease.

It is the subconscious grinding of teeth during sleep. This term is generally applied both to the clenching habit, during which pressure is exerted on the teeth and periodontium by actual grinding and tapping sound of the teeth. It is one of the most common sleep disorders.

It may been seen in infant/babies with the eruption of the first tooth. Usually the lower teeth will erupts first in babies and the teeth will come in contact with the upper gums without teeth causing a wound in the gumpads. The reported incidence of bruxism in children varies widely from 7% to 88%.

It may occur throughout life, however it is seen to increase during mixed dentition period and decreases with age later.

a) Psychological factors Â like high levels of anxiety, stress, emotional tension. When a person suffers from fear, rage, rejection or a variety of emotions which she/he is unable to express, these become hidden in the subconscious but are expressed periodically by numerous ways. Bruxism is a manifestation of nervous tension in children as well and may be related to chronic biting or chewing of toys.

b) Occupations. An overenthusiastic student or compulsive overachievers may also develope this habit. Â Athletes engaged in physical activities often develope bruxism, although the exact reason for this is uncertain. Voluntary bruxism is also recognized in those person who habitually chews gum,tobacco, toothpicks or pencils. Although voluntary, this too is a nervous reaction and may lead eventually to involuntary or subconscious bruxism.

c) Genetics.Â It is seen to play an important role in etiology of bruxism. Children of bruxing parents have an increased incidence of bruxism.

d) Systemic Factors.Â Magnesium deficiency has been reported as an etiological cause for bruxism and has treated several cases with therapeutic doses. GI disturbances from food allergies, enzymatic imbalances leading to chronic abdominal distress could also be a cause. Various systemic factors such as intestinal parasites, sub-clinical nutritional deficiencies,allergies and endocrinal disorders have also been attributed.

e)Allergies. Â Allergies have also been related to nocturnal bruxism.

f) Central Nervous System. The etiology of bruxism could be from certain definite cortical lesions. It is found in children with cerebral palsy and mental retardation.

a) Frequency of bruxism

b) Intensity with which the patient is bruxing

C) Attrition of the teeth.

D) Pain in the jaw muscles on waking up

E) Pain in the tempero-mandibular joints

F) Deviation of the chin during mandibular movements occurs more frequently to the left. 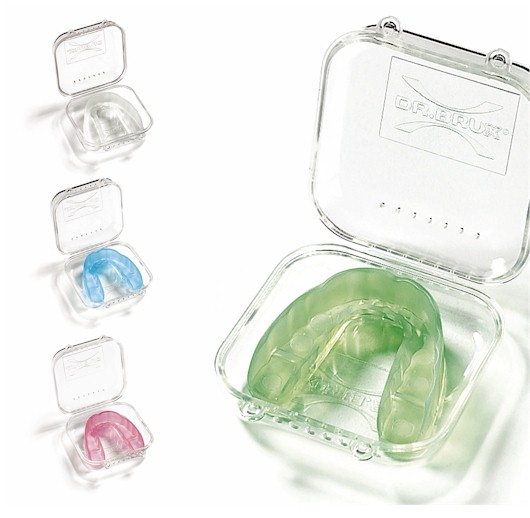 a) Occusal Adjustment.Â  This would results in instant disappearance of habitual grinding of the teeth. Any prematurities or occusal interferences in restorations should be corrected.

b) Occusal Splints.Â Vulcanite splints have been recommended to cover all the occusal surfaces of all the teeth. A reductionÂ in the increasedÂ muscle tone is observed with its use.

c) A mouthguard Â  is designed for treatment of temperomandibular joint disorders.

d)Â Physchotherapy. Counselling the patient can lead to a decrease in tension and also create a habit awareness.

2 thoughts on “Is it normal to clench my teeth frequently?”