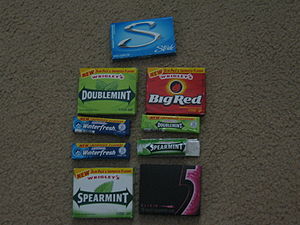 Xylitol is a naturally occurring sugar which is found in various fruits and berries such as strawberries,raspberries and plums. It is also known as “birch sugar” as it can be extracted from birch wood. Xylitol,when consumed, has the potential of reducing dental decay. On the other hand, sucrose (also found in fruits but with a higher sugar content), is a highly cariogenic sugar, meaning it yields high levels of acid upon fermentation. Therefore, substitution of sucrose with xylitol has the benefit of reducing the occurrence of dental decay.

Xylitol is also produced by the human body during normal metabolism. It is an odorless, white crystalline powder which has been used as a sweetening agent in foods, as a substitute for sucrose.

Xylitol is a five carbon sugar, differing from sorbitol, glucose and fructose, all of which have six carbons, therefore yielding more calories. It is equal in sweetness to sucrose. It produces less energy compared to sucrose, and is absorbed more slowly than other forms of sugar and therefore does not contribute to high blood sugar levels. Excessive intake of xylitol may cause stomach upset,resulting in diarrhea.

HOW DOES TOOTH DECAY OCCUR?

Tooth decay, or “dental caries” as it is known, is caused by two groups of bacteria residing in the oral cavity, namely streptococcus mutans and lactobacillus.

These bacteria metabolize fermentable carbohydrates such as sucrose, glucose and fructose to produce energy. In the process of fermentation, acid is produced and this acid breaks down the outer layer of the tooth, hence causing tooth decay.

Oral bacteria has a specific system consisting of enzymes known as phosphotransferase system (PTS) .The bacteria uses this system to transport various types of sugars into the bacterial cells and regulate their metabolic processes.

HOW DOES XYLITOL PREVENT TOOTH DECAY?

The acidic condition in the mouth is an excellent condition for the bacteria to thrive and multiply. Xylitol reverses these processes which produce such conditions as follow:

2. Effect on adhesion to tooth surface

Oral bacteria adheres to the tooth surface through carbohydrate binding proteins. Xylitol inhibits the binding of bacteria to the tooth which results in decreased adherence.

Xylitol in a 6Â % concentration is capable of reducing the adherence of streptococcus mutans to the tooth surface.

In addition to inhibition of bacterial growth, xylitol also disturbs the metabolic processes taking place in oral bacteria. Oral bacteria uses external carbohydrates from the food we consume to produce energy. When there is lack of carbohydrates in the oral environment, the bacteria synthesizes its own carbohydrates known as polysaccharide to be used as energy source. Xylitol inhibits the production of the polysaccharides and its metabolism. Xylitol also inhibits metabolism of protein and damages the structure of bacteria.

Sucrose is a highly cariogenic sugar which means it produces high levels of acid upon fermentation. Xylitol is used as a sucrose substituent sweetener in many products such as chewing gum, toothpaste, mouthrinse, candy and nasal spray.