The American Academy of Periodontology published a position in paper summarizing what is known about these instruments and how they compare in their effectiveness (J. Periodontol 2000:71;1792-1801). Recent modifications of tip design for power driven scalers provide improved access into deep pockets and difficult to reach areas such as furcations. Therefore, studies were undertaken to shed light on the potential roles of sonic and ultrasonic scalers in periodontal therapy. 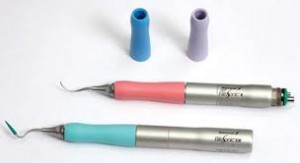 Basically, there are two types of power driven scalers. Sonic scalers are powered by compressed air and operate at lower frequencies which range between 3000 to 8000 cycles per second. An example of this type of scaler is the Star Titan sonic scaler. Also known as air scalers, these scalers use a metal cylinder (rotor) balanced between oâ€™rings to provide vibration when air pressure is applied. These attach to a standard handpiece coupler on your delivery system and operate at normal handpiece drive air pressure (32-35 psi). 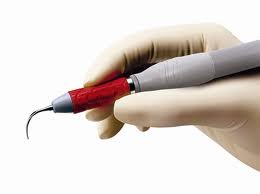 Ultrasonic scalers are divided into two types. Magnetostrictive ultrasonic scalers operate between 18000 and 45000 cycles per second. An example of this type is The Cavitron. The movement is generated by passing an electrical current over a stack of metal strips or a metal rod which is attached to the scaler’s tip. The tip movement can be linear or eliptical and all surfaces are active while in use. These scalers are usually considered easier to use (less technique sensitive) but are sometimes considered as less gentle.

Piezoelectric units operate between 25000 to 50000 cycles per second. Movement is generated by electricity passing over crystals housed in the handpiece. The tip movement is generally linear and allows two sides of the tip to be active. Piezoâ€™s are more technique sensitive given the linear motion of the tips. One must use the scaler parallel to the tooth surface to avoid â€œhammeringâ€ with the piezo tip. When used properly, many consider the piezo to be gentler than magnetostrictive scalers. These differences in the type of movement can generate different root surface alterations following debridement.

Clinical Comparisons- What really matters most are whether or not there are different clinical outcomes depending upon the type of instrumentation selected. In comparing sonic, piezoelectric and magnetostrictive scalers, studies have shown nearly equivalent clinical results in spite of the differences of frequencies, tip movement, and root surface characters following planing. When comparing powered scalers vs handed instrumentation, again similar reductions in probing depth and bleeding up on probing all are achieved. After reviewing all available data, it was concluded that improvements in clinical parameters are nearly equal for all types of mechanical instruments as long as sufficient time is spent to thoroughly debride the roots. However, powered scalers do have some advantages over hand instrumentation.

Plaque Removal- Studies confirm that plaque removal can be equivalently accomplished by powered driven or hand instruments. However, the lavage effect, which provides a constant flushing of the periodontal pocket during instrumentation appears to have some improved therapeutic effects. The lavage effect coupled with the cavitation and microstreaming improve the dislodgement of plaque slightly beyond the reach of the instrument tip. (a negative consequence of this is the notable generation of contaminated aerosols. Proper infection control procedures must be in place). 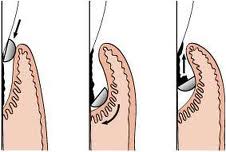 Access to furcations- furcations present some of the most difficult locations to debride. Ultrasonics has proven to be clinically superior in the treatment of class II and class III furcations. New tip designs that are .55 mm in diameter have of become the choice instruments for these areas.

Summary- “Ultrasonic and sonic scalers appear to attain similar results as hand instruments for removing plaque, calculus and endotoxin. Ultrasonics used at medium power seems to produce less surface damage than hand or sonic scalers. Due to instrument width, power driven scaler tips seem to be more effective in furcations.” What matters most is the time spent per tooth and mastery of your particular debridement system.